Milk Cereal is suitable for children starting from 5 or 6 months. Milk cereal can also help to get your baby used to a spoon. It is available with millet, spelt and with bananas. 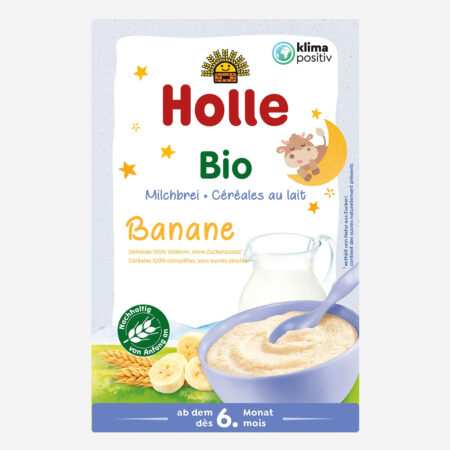 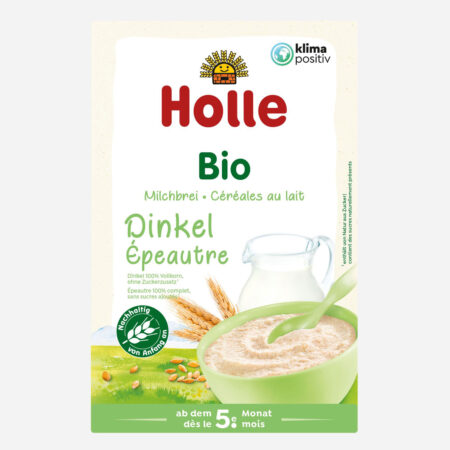 Holle Organic Milk Cereal with Spelt is suitable for babies from 4 months an onwards as part of a mixed diet. Milk Cereal ist ideal…
Add to cart
Add to wishlist
Quick view 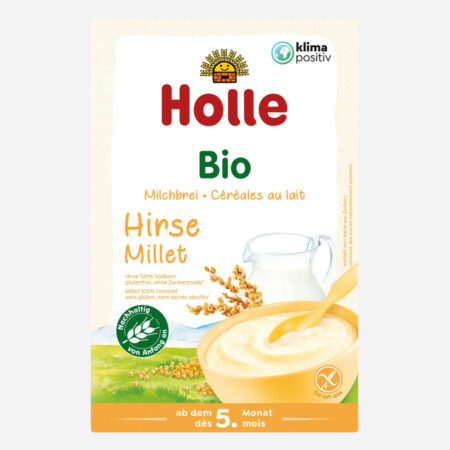 The use of organic milk in the production of cereals is referred to as organic milk cereals. This indicates that the milk used in the cereal production came from cows that were not given any synthetic hormones, antibiotics, or other medications designed to promote growth while they were being grown. In addition, the cows are fed food that does not include any genetically modified organisms (GMOs) (GMOs).

Additionally, organic milk cereals are an environmentally responsible choice to make. Methane is a greenhouse gas that contributes to climate change, and cows that are kept organically produce less of it than conventionally raised cows. In addition, organic farming operations tend to be more sustainable than conventional farming practices, which means they have a smaller negative influence on the surrounding environment.

Milk Cereal is appropriate for youngsters as young as five or six months of age. You can also use milk cereal to assist your infant in becoming accustomed to using a spoon. You can also have it with spelt and bananas. Millet is also an option.

Cereals made with organic milk are an excellent alternative to consider if you want to reduce your impact on the environment while still getting a satisfying breakfast.

What Are the Benefits of European Organic Milk Cereals?

European organic milk cereals do not use synthetic pesticides or fertilizers

The production of organic milk cereals in Europe does not include the application of synthetic pesticides or fertilizers, both of which have the potential to cause damage to the natural environment. Pesticides and fertilizers made from synthetic materials have the potential to make their way into waterways, where they can pollute the water and be harmful to aquatic life. In addition, human beings can inhale them, potentially hazardous to our health.

In addition, the flavor of the milk is more robust, and it has a higher concentration of omega-3 fatty acids than milk from cows fed a standard diet. It is believed that omega-3 fatty acids are good for human health and can aid in improving cognitive function and reducing inflammation.

Cereals made with organic milk from Europe are a wholesome option for a child’s diet because they are an excellent source of calcium, protein, and other necessary nutrients. Calcium is crucial for healthy bones and teeth, while protein is important for a person’s continued growth and development.

The digestion of organic milk cereal is eased. This is due to the fact that it is produced with organic milk that has enzymes added to it throughout the manufacturing process. These enzymes break down the milk’s proteins, carbs, and fats, ultimately making it simpler for the infant to digest.

It provides a better source of vitamins and minerals

Vitamins and minerals can be found in high concentrations in organic milk cereal. Vitamins and minerals must be adequate for the body’s systems to operate well. They play an important role in the regulation of metabolism, and in addition, they are essential for the formation and upkeep of tissues.

Are you aware that baby cereal is most parents’ primary food to give their infants and young children worldwide? Between the ages of 4 and 6 months, 65 percent of babies already prefer cereal for their meals.

When it comes to breakfast cereals, Holle is responsible for producing some of our very best picks. The majority of Holle’s cereals, in addition to being certified organic throughout Europe, also possess the Demeter seal, which is widely regarded as among Europe’s most stringent organic certifications!

Beginning with the 5th month, Holle produces a wide range of cereals appropriate for infants and younger children. You can choose milk cereals for your baby to provide them with a broad and well-rounded weaning diet thanks to the wide variety of grain options available!

Holle is a well-known and reputable company that has been producing baby food for more than 85 years; as a result, they are one of the oldest companies in Europe specializing in infant formula production. Their business was established in 1933 in the city of Arlesheim in Switzerland.

Holle is an innovator in biodynamic food and was among the first firms to earn the Demeter organic seal for their products.

Today, Holle is recognized as one of the most prominent organic infant formula makers that are Demeter certified. Did you know that as of 2014, all milk cereals produced by Holle have been carbon neutral? When it comes to making baby food and formula, Holle uses a holistic approach that is mindful of the health and safety of humans, animals, and the environment.

They ensure that the highest possible safety steps are taken to produce high-quality taste and nutrition in Holle products, which distinguishes them from other brands of baby food available on the market.

Our organic Milk Cereal is made from wholegrain, premium organic vegetable oil and organic milk from cows raised in a bio-dynamic and natural environment.
You want a quick meal for your baby? Organic milk cereals are easy to prepare: just add hot water to milk cereal, stir and let it cool done- ready.

Fast Shipping
We know that receiving your shipment in a timely manner is of great importance to you, because hungry babies can’t wait!

Best Price
Because we obtain our authentic organic formula directly from the manufacturer we ca offer you the best price.

Safe Shopping
We fulfill the “Trusted Shops” quality criteria. Compliance with the criteria is continuously audited by experts.

Fresh new batch
The freshness of our products is important to us. This is why our products expire at least 1 year.
Baby's Best Food GbmH Bismarckstr. 63-64,
10627 Berlin
+49(0)30-22069998
[email protected]
Contact us
Shipping Information
Payment methods
Privacy Policy
Return & Refund Policy
Imprint
Terms of Service
HiPP
Holle
Lebenswert
Enter your email below to be the first to know about new collections and product launches.

You were not leaving your cart just like that, right?

Enter your details below to save your shopping cart for later. And, who knows, maybe we will even send you a sweet discount code :)

Please enter your username or email address. You will receive a link to create a new password via email. Remember now? Back to login